Single Page Applications (SPA) are convenient as they provide a smooth user experience. For SPAs React is a good choice. But this blog is not about React, this is about AWS services that can be used in automatic deployment of SPA.  AWS services to be discussed are CodePipeline, CodeBuild,  CodeCommit, and S3.

S3 is appealing service not only from a storage perspective but also due to the possibility to configure it to work as a static website; combining low price and high scalability.  S3 website is also a ‘Serverless’ approach. The lack of IP address can be handled with Route53 (using S3 website as an alias). But lets move on and say the name of the static-website bucket is www.myraectapp.com.

The CodePipeline can be used as the main framework to address the continuing development. The pipeline can include several phases and each of the phases can be one of the handful of types. A basic pipeline contains just the source of the code (CodeCommit) and a buildphase (CodeBuild). There is no need to set any deployment phase. CodePipeline stores all output artifacts of the phases in S3 bucket and if those artifacts are used for example by Lambda in another phase of the pipeline, IAM policy with suitable permissions to the codepipeline-bucket should be attached to the Lambda’s service role.

Integration between CodeCommit and (for example) Git makes it convenient starting point of the pipeline. Once user credentials for IAM user are set up, the user is able to connect the CodeCommit. The CLI-usage of the CodeCommit is not different than Git as the user experience is exactly the same. Setting up CodeCommit as the source for CodePipeline is presented in figure 1. 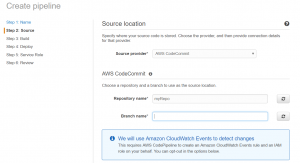 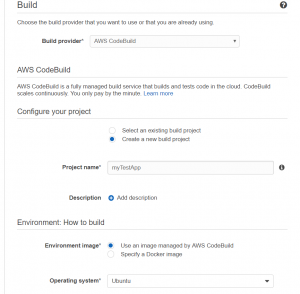 The heart of the CodeBuild project is the buildspec.yml file. The build process is divided into several phases that can be used to run custom commands and scripts (check the example of buildspec.yml file below). The formal syntax of the yml-file is crucial, and it seems to be typical that syntax-errors are not necessary very conveniently identified from the logs. So make sure all those spaces are correct! As shown below (post-build phase), the build files are copied to www.myreactapp.com bucket. The sufficient IAM policy with permission to access the bucket should be attached to the CodeBuild service role.

Also notice that the version number (0.2) is not a random number. It is a static number defined by AWS.